This page, despite being a bit more personal, is inextricably linked to my teaching, scholarship, and research. I will share with you all some of the key ideas that have shaped all my work, beginning with the "Dr. Berry" nickname, "Nothing Easy!!", Kung-Fu, and my rules, as well as those people who have become my inspiration over the years. 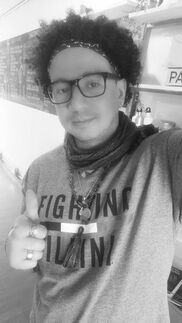 Before I go on, let me explain that "Dr. Berry" thing. That's a moniker with a story even longer than that of "El Patrón Himself" (I'll get to that in a different section of this site), so here it is:

It all started back when I was a teacher at the Colombo Americano, here in Medellín. Since my last name is "Mora", which is "Blackberry" in English, some of my friends used to call me "Mr. Blackberry", which got shortened over the years to "Mr. Berry". Fast forward to 2010, when I returned to Colombia. One of my friends from the Colombo days, now an esteemed colleague and dearest friend at my university, updated the moniker according to my new degrees and, therefore, I was now "Dr. Berry". One day I told my preservice teachers that some colleagues addressed me as "Dr. Berry"... and the rest is history!

I find it very endearing, although I've had a few students in the past address me as "Dr. Berry" in correspondence to other faculty (yes, I've had to tell them that "Dr. Mora" is the customary title in those cases)! I like this moniker and I even sign my e-mails as "Dr. Berry" (which sometimes causes my students to freak out when I sign "Dr. Mora").

When it comes to the lessons I try to teach my students beyond the classroom, I have drawn from three things: my old motto, Nothing Easy!!, the idea of Kung-Fu, and my Rules. I will explain them below, along with a long list of inspirational characters.

And What's Up With the Afro? 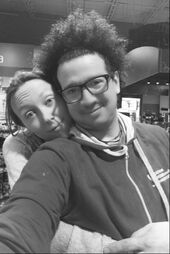 Yes, the afro... funny story. Actually this is the second time I've had the fro! The first time was in 2005 when I was in grad school, but only had it for the fall semester, by the end of the spring of 2006, it was already gone. The second time (and pretty much permanent for the foreseeable future) started in 2013, during my honeymoon. At that time (and with Polina as my main accomplice!), I had my "midlife crisis" and decided that the Fro needed to make an epic comeback! I started wearing sports headbands at the beginning and then I added the indigenous headbands I wear today that have become part of my distinctive ensemble (along with my epic scarves and the vests!).

During this time, I have really come to embrace my afro as part of my identity and even my roots, since, as my good friend and former professor Sharon Tettegah told me when I had the Fro 1.0, I definitely have some Africa in me! It's helped me as a scholar because the Fro stands out (of course, that's an extra incentive to work harder to show there's good scholarship beyond the Fro!). For the students... well, it's always a bit of a shock but they get used to it!

That Nothing Easy!! Thing 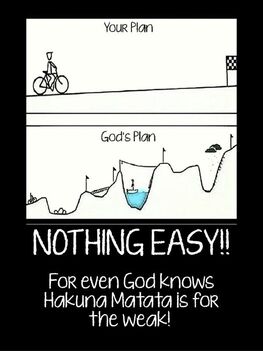 Inspiration comes in all shapes and sizes: Some find it in movies, some in novels or poetry. I found "nothing easy" in the unlikeliest of places, basketball! I heard that phrase at the right time in my life, when I was working on my dissertation. Right there and then, it hit me! THAT would be the motto that would serve as motivation to finish.


​NOTHING EASY!! (yes, with two exclamation signs!) continues to be a source of motivation. In reality, I think it's a very interesting life philosophy: If things are easy, you don't really appreciate them as much. Things that cost you matter more, as you know you had to make an effort to get them, that you had to struggle to achieve them. Nothing Easy!! reminds me every day that I have to continue working on my Kung-Fu (see below) and that I can't take things for granted. In fact, I believe in Nothing Easy!! so strongly that I have it as a tattoo in my left arm! After all...

It wasn't "Hakuna Matata" what helped me finish my doctorate! There, I said it! 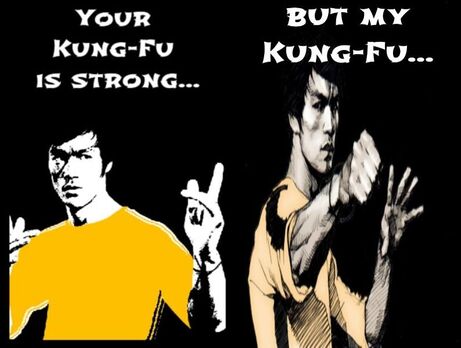 While in pop culture, "kung-fu" has become a synonym of martial arts (and to an extent, badly dubbed martial arts films), the philosophical connotation of Kung-Fu does transcend fighting or martial arts. That's how I use the idea of Kung-Fu

Kung-Fu (or Gung-Fu, as they use it in Chinese) actually means "the development of one's skill or arts through training and hard work." For me, Kung-Fu is a way to understand that I'm never fully done, that I must work harder to be excellent at my crafts. Working on my Kung-Fu means that I must devote time to become a good teacher, a great researcher, but that I also must devote the same level of commitment to be a good son, brother, friend, uncle, dog parent, and husband.

When I tell my students to work on their kung-fu is because I believe in their potential and because I want them to be the best teachers ever... but that getting to that level takes hard work... and why do I know that?

Simple:
I learned that from my Shaolin Masters back at the cornfields!

These days, I still practice the Kung-Fu, I just now affectionately talk about Kung-Fro, or as I post on my own Instagram, #kungfrojedimaster! 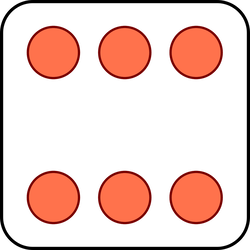 I have a simple set of rules that I apply in my classes and my work with my research team. They're very simple, yet I feel that abiding by them will help my students far beyond the time they spend with me. They have grown over time, usually in response to my students and mentees, the best reason to keep working on my Kung-Fu every day!

These are the rules:

This is perhaps the most important rule of all. I call it, the one that will serve you most as an academic:

Don't ever use a term you can't define in your own words.

It applies to questions and the kinds of questions we should ask in class:

I never ask rhetorical questions... but I don't always expect you to answer right away, so think about your answer!

About honesty when we speak to our students:

I never say or write anything that I don't believe it's true. I don't give stickers or stars for motivation, I'll tell you if you did well and I'll tell you when you didn't. I say what I mean and I mean what I say!

This rule appeared as a response to some of my students' reactions regarding their assignments and about their eternal need to panic. So, I came up with this simple little rule:

DO NOT PANIC until Dr. Berry tells you to!

This rule appeared as the consequence of my students' questions and challenges (and trust me, my research team knows this one very well). It is very simple:

If you come up with a really insane idea before the good doctor, you had better be ready to get it done.

This one is the result of my work with my graduate students and my Legion at the Literacies in Second Languages Project. It is also part of my own philosophy of teaching and my belief in moral authority as a mentor:

Don't ever ask your students to do anything that you can't do yourself or you're not willing to learn to do with them!

My Sources of Inspiration 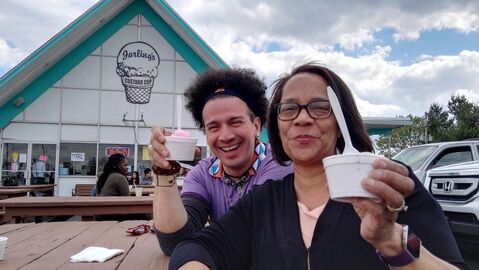 Back to Jarlings with my mentor and sensei, Professor Willis - 2016
I draw from a long line of thinkers, theorists, and researchers from fields like literacy, socio-cultural theories, and critical theory. I also draw inspiration from real and fictional popular culture icons, or as I usually call them in class, "post-modern philosophers." In random order, here are some of the people who inspire my scholarship and have helped shape my research agenda:

AND... MY FAMILY!
My mom, who taught me that sometimes you need to make hard decisions, even if they make you unpopular at first if that's what's best for those for whom you are responsible.

My dad, the biggest badass I've ever met, who made a big deal about working hard on one's education, and taught me about initiative and how "the one thing people reward with money and fame is initiative" (from "The Letter to García).

My sister, probably one of the best teachers I've ever met (and probably an even better school teacher than I ever was), who always reminds me that we all must make sure that whatever we do in life won't close doors to those behind us.

POLINA AND THE CLAN MacLEOD
Here I need to mention my inner circle (as pictured in the Welcome page):

First, my partner-in-academia, my ride-or-die, my biggest accomplice and my favorite co-author, the love of my life and everything in between Polina, my favorite study partner, whose resilience and discipline keeps rubbing off on me.

And then there's of course, those two furry babies, the #truedynamicduo, the #kingsofshenanigans, and the fluffiest, cutest, awesomest doggos in the world, Connor MacLeod and Duncan MacLeod of the Clan MacLeod (yes, it's because of THAT!). Mr. Barbuchas and Mr. Barbitas are a source of joy and they keep me grounded in the simplest ways. Plus, they're great writing companions! (Check them out on Instagram!)
Back to nothing easy!!